Why Normal Is Limited. 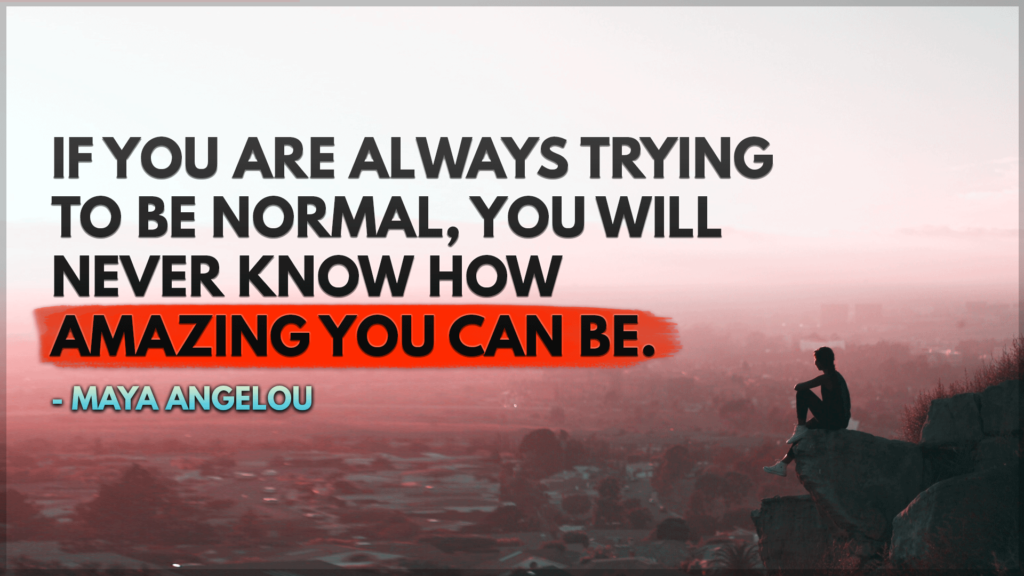 Have you ever heard someone say to you or to others “That’s not a very normal thing to do or say.”?

In fact, this past Thanksgiving my Uncle Rich was speaking to me about what I post on my Facebook page and how that what I talk about is “Not normal.”

I told Kelly as I was leaving from my Aunts for Thanksgiving which is my Uncle Rich’s wife that I’m surprise she wanted to become my friend to read what I post, because my Uncle Rich doesn’t approve it.

And his exact words where….

“I wouldn’t say anything if you would just talk normal.”

I could feel the hurt and the stress in his words, and It’s clearly why and that’s when you discuss things that either people don’t understand or it threatens what they think they know, they don’t like it.

Basically what anyone is saying is that if you speak about abnormal or against normal than you are in the wrong, because you’re going against “What I think I know, for absolute certainty.”

And generally what we think we know for absolute certainty is what the normal collective minds has reminded me of over and over again.

What does it even mean to be normal?

“Conforming to a standard; usual, typical, or expected.”

Normal means that the masses (dominant part of the population) have come to mutual agreements/disagreements on particular beliefs, morals, ethics and anything in between.

Every single perceived individual is unique, not special, but unique in that the mind comprehends everything in differently to some degree.

But until you awaken inwardly, you won’t have any other option but to conform to the standard of what society has deemed necessary.

You will not be able to express your unique, distinctive characteristics in this world to the greatest possible extent until you have awakened.

Expressing your unique characteristics to the world is not selfish, because it is not for your mind it is for the whole, meaning that it is the most selfless thing you could do, to help push humanity forward.

However, you share a part with the same collective mind as humanity.

If you think you are a free thinker, then please next time you go out in public go out butt naked and tell me how far you get.

Why do you where clothes?

We by nature don’t need clothes to survive?

It’s because you were taught that wearing clothes is not just normal it’s the law in most parts of the world.

(This is not saying you should not wear clothes, it’s more about the principle of the matter)

You would probably be completely and utterly embarrassed if you didn’t where clothes out in public, NOT because it is embarrassing but because of how you have been conditioned.

A newborn baby is not at all embarrassed about being but naked, the principle is your thought patterns don’t have an intrinsic absolute reality.

If you take a look at many different areas in your life, you will realize many of the things you do aren’t based on the natural spontaneous version of you. You do them because you learned them, based on normality, in other words you learned how to be normal.

And what does it mean to learn?

It simply means that information filters through your mind and in that process that thinking has now altered your mind.

So what does this mean about the mind at the root core?

It means that your mind is not yours.

Then who’s is it then?

You just share the same collective mind with the world.

But from the broadest view is it realized the space makes up literally everything.

But in absolute reality space cannot be divided accept from the human mind.

Space has literally been labeled and divided. This means that there is perceived something there, where space is no-thing, so nothing is there or anywhere.

Space however is infinite, at least beyond what the human mind can grasp.

And infinity is not affected by measurements such as addition, subtraction, multiplication and division which are used to compare measurements.

You can’t add, subtract, multiply or divide anything by infinity, because infinity immeasurable, it just is.

Take away your mind, take away thought, and it takes away these divisions that your mind perceives.

When you stop grasping space with thoughts then and all’s you have is one infinite, vast space.

Take down the walls of a room, the structures of a building and the space that occupied that building or room is no different than previously, it still is.

Take away your body and another object and the space between you is no different than it was as it appeared.

What is this point of this?

It means that if all is space and not affected by objects, then you must be this same space as well.

It means that who you are is this ungraspable space and it is not affected by your body or your mind. When this you can know yourself as this space, with the mind and all thought vanish, then you have awakened.

This space is uncontaminated the conditioning, programming, culturing, society, how to behave, what to say, how to think and how to feel. The space is unaffected by ANYTHING that the mind can grasp.

It is from this space, and ONLY this space that creativity itself can blossom out of your body, and manifest itself into the world of things.

This creativity is born as spontaneous and instantaneous actions that happen without the mind thinking preparing it.

This creativity itself, is born from omnipresence, because from this space not a single thought is manifested.

It is like having the mind of a newborn baby forever, without the need to survive or live physically.

In reality though, a newborn baby does not have a mind, until it’s very first thought has been taught into it.

Now we can come back to the mind, the universal mind is infinite and limited simultaneously.

How could infinity be limited?

It is only limited from within the mind because the mind can’t actually comprehend it infinity.

It is unlimited when infinity is aware of itself outside of the mind, as space.

Math was invented so that we can try to comprehend infinity and all’s we did was divide and label space that that is impossible to measure by itself as space.

This is not bad, but on a practical level, it’s why you suffer over your phone bill not being paid on time.

So essentially the point being is that the universal mind itself is normality itself.

Your thoughts are not yours, they are the worlds, you just express yourself in this form in this world by using the collective mind, uniquely.

Your self-image, concept and identity are created by thoughts which are compared and contrasted with everyone else.

How would you perceive your self-image without the rest of humanity?

Who you are in form is in relation to other.

“If you are always trying to be normal, you will never know how amazing you can be.” ― Maya Angelou

There is an access point within us that is beyond this universal mind and it is called consciousness.

Words will divide up this infinite space, you think about this, don’t allow it to become a thought process, but feel where the words are pointing.

Consider the entities in this world that are incomprehensible aside from space, infinity and eternity.

One that the universal mind has used over and over is God.

The universal mind throws God around if it actually knew what it was or could actually comprehend it.

God is just a word, and words are created from thought, and thought is born out of time.

Time is not just limited; it does not exist. So God does not exist to the human mind, God is existence itself as the ungraspable omnipresence, space.

Consciousness is the way of that the human form can be aware of this ungraspable existence.

It is through consciousness that you go beyond the limitations of the universal mind and come to be aware of God, without naming it in the mind.

The infinite, eternal space once aware of, then there will nothing to label, to divide, to call but simply awareness alone, out vast ocean of space.

Normal means dividing space, and splitting up your unlimitedness.

Space is your infinite being, and it is through this space, right here and right now from where you can show the world the peak of your uniqueness.