Why Attachment Leads To Suffering 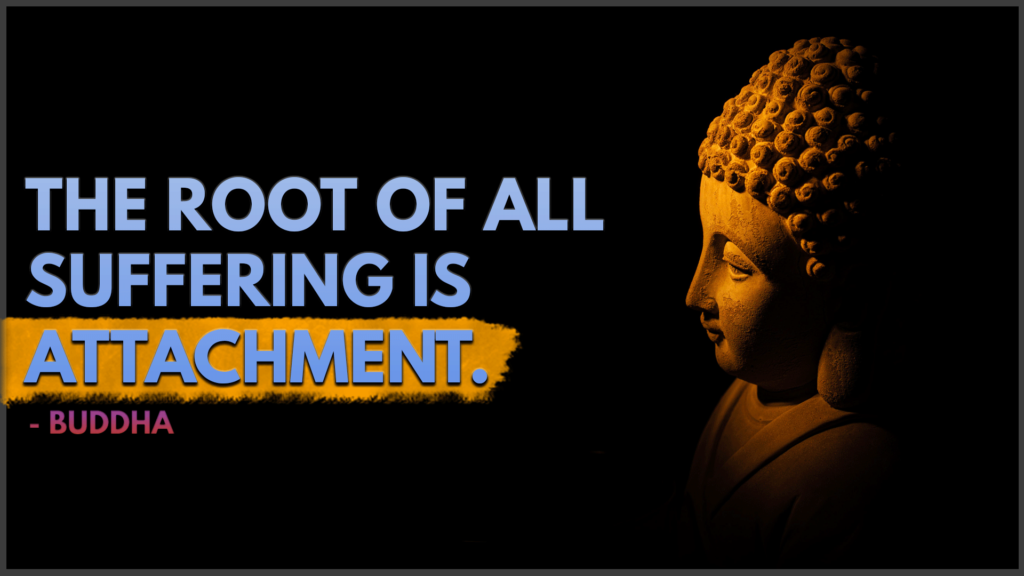 “The root of all suffering is attachment.” – Buddha

Attachment is the identification of who you are with anything conceptual.

You gain a complete sense of yourself with anything that is perceived by thought.

Consider for instance the story of Jerry. Jerry grew up in the slums of Los Angeles his whole life, he was always surrounded by gangs and cracks in the walls and ceilings of his home.

He couldn’t afford to clean his clothes, so they were constantly reeking of bad odor and he also had holes in them.

At 6’3 he never weighed more than 150 pounds because he could not afford to eat very often.

As a result, Jerry had no confidence in how he viewed himself as a person (he had a weak self-image).

This lead to anxiety and a lack of confidence with women, trying to get and keep a job while going to school. His sense of “self” was very low.

Then one day a grandfather who he had never met passed away (and who was very wealthy).

Jerry inherited n the will of Grandfather $50,000,000 was the amount of money Jerry had received from his grandfather’s will.

As you can imagine, Jerry was instantly ecstatic that his life situation had instantly  taken a three hundred and sixty degrees turn.

Jerry bought a new mansion in the downtown suburbs of Silicon Valley. He then proceeded to buy a private jet, a Bugatti Veyron, a large boat and he hired a maid.

Jerry went directly to downtown Los Angeles, found a professional fashion designer, bought lots of very expensive clothes, so that he would look nice for once in his life.

His confidence sky rocketed and he landed himself a model wife. In Jerry’s mind he finally felt enough.

The luxurious house, the car, the jet, the boat and his wife all gave him a sense of completion, a strong self-image.

However, as the weeks and months passed, Jerry found himself in a deep state of depression.

Now why would Jerry, whose life had just previously turned right side up, be going through depression?

He went directly from the slums into a luxurious life overnight. What happened next was that Jerry went from feeling super confident to feeling like he didn’t deserve this stuff.

Jerry felt like a fake, someone who never could have achieved such a lifestyle on his own.

He also began to have nightmares about losing such a lifestyle and being back in his old slum-like lifestyle.

What happened was he attached the sense of who he was as a person in totality with his situations, circumstances, materials and people.

This root of attachment to things, experiences and people boils down to how secure someone is internally.

Everyone has their individual strengths, weaknesses, confidence and insecurities when it comes to situations, materials, experiences and people.

This is where a good portion of the world is in terms of their internal reality.

This means that you are a slave to the surface of this world, you look for the world to give you happiness or rather keep you from being unhappy, this is the root of attachment.

The root of this attachment happens because of the false belief in who you are in the absolute sense.

When you find out who you are, in the absolute sense, then the mind will still have desires and attachments but they will be a lot less strong.

Finding out who you are goes beyond the surface level of the world, it goes beyond situations, materials, experiences and people.

Finding out who you are is the only way to see through your attachments and desires.

Jerry’s life and self-image had been split up into two different images. One image of him was when he was poor and didn’t have anything, and one was where he was rich and had everything he could want, or at least what he “thought” he wanted.

In both lifestyles who was at deepest core never changed, and will never change regardless of what happens in the physical world.

When you take a step back from thinking and go to your heart with awareness you really begin to see the root causes of your attachment. When thought arises, it takes a specific form, and if this form is not eventually realized through awareness, it becomes neurosis.

In fact, having a self-image and thinking that this is who you are is a form of neurosis itself.

It’s because ANY image is a thought, and any image believed in absolutely is going to cause attachment and will lead to suffering.

In fact, the mind believing in itself to the full extent is the ego, and the goal of the ego is to keep itself alive and to grow and expand.

Once the mind (disappears not forever but for this moment) then you know who you are without comprehending it.

The mind that creates this self-image and believes this image to be reality takes over your body into full puppet mode, leaving the body with a void, and where there is a void there is desire to fill that void, to fill that insecurity.

Desire is to expand your sense of self into more. There will always be lack, where there is you (Consciousness) who is stuck in the mind and in time.

And because there is lack, there is desire in the hope to make up for this lack or to get rid of it completely.

It wants to get more, achieve more, be more because it believes, through this getting and achieving, the “I” (and in this case the self-image) can then be enough.

The cycle of desire comes back to one of the main obstacles that humanity is challenged by, and that is the fear of lack.

The fear of not being enough according to “the world.”

When you achieve something you desired especially if it was hard to get, you feel alive, it gives you pleasure, it gives you excitement…. for a moment, but as time passes, whatever the material, experience or person, you will lose what they once originally gave you, in terms of internal freedom.

This allows for the ego to go back to its way of wanting, craving, desiring and thus gives you pain, the pain that wants more pain.

Consider the situation Jerry was in: first he was poor then rich, but see how he got everything materially he had always dreamt of and, yet, it did not ultimately fulfill him.

What Jerry hadn’t realized ws that even when he was poor materially, experientially and financially, he was who is REALLY IS underneath the surface of the world, and that in and of itself is the fulfillment.

Does this mean you will suffer if you go after your dreams and acquire expensive cars, homes and other materials?

I feel strongly about experiencing this world in any way you please, so long as it’s born out of expanded awareness for the sake of internal freedom.

It means that if you are looking for those to add more to who you are which is already free, THEN you will suffer.

With mindfulness you can learn to detach from the most important root of all attachment, and that is that it’s alright to have a self-image in this world for logical purposes, but detaching from this being is you in the absolute sense.

Detaching from thinking that who you are is the mind.

Mindful awareness is recognizing EVERYTHING in your life and asking yourself “Who would I be without such and such?”

Detachment is recognizing that certain concepts have a grip on your identity and loosening the grip by realizing that you don’t need them to be complete.

What about attachment to things such as food, water and shelter?

These are absolutely necessary to survive on this planet, but again they don’t make who you are either, and if you can feel this breath, then you have done what is necessary to guarantee your physical survival and will likely continue this.

And even for the sake of those who are starving, who you are does not change, it is timeless.

Once the world awakens to this, in my best estimation, the world will change to the point that not a single person will go unfed.

All in all, the mind desires, the mind wants, the mind needs and this is perfect; however, the mind must take a rest sometimes so you can realize you and be fulfilled for this very moment.