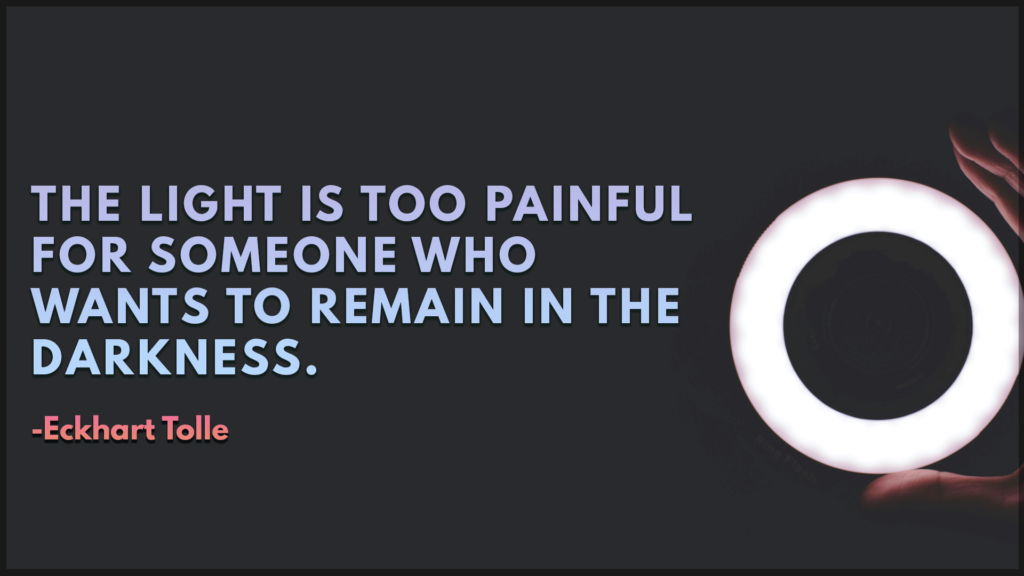 The collective mind will look down on people who are talking out loud to themselves and think, “Aww poor folks: I hope they find help or have been helped.”

Meanwhile the mind itself sits there and talks to itself about the person talking out loud, not realizing that it’s not much different in the grand scheme of things, except it’s not out loud.

“You have probably come across (mad) people in the street incessantly talking or muttering to themselves. Well, that’s not much different from what you and all the other (normal) people do, except that you don’t do it out loud. The voice comments, speculates, judges, compares, complains, likes, dislikes, and so on.” – Eckhart Tolle

Eckhart Tolle is essentially saying that “normal” is insane. “Not me” the mind says, I’m too normal of a person to believe I’m insane.

Now, of course, this mental illness is stronger in some people than in others if you take a look at the nature of the average human mind, though most are caught up in an obsessive-compulsive thought stream without realizing.

And when you don’t realize the mental stream of thoughts that never stop, you are trapped inside of the mind.

When you don’t realize there is a way out of obsessive thinking, you have gone mad. This is never questioned, though, as “mad” or “insane” because it is the normal way that people live their lives.

The common dysfunction of the human mind is that all this suffering the mind is putting itself through is just the way things are, so why even bother to question it?

The mind is taught by other minds to “use your head” and continue using your mind to make sure you’re going about life the “right” way.

It’s no wonder that there is a lot of insanity in a world that teaches you that your focus should be on using the mind and that that is what truly absolutely matters.

What truly and absolutely matters is your inner state of consciousness.

Consciousness is about your relationship in this physical world with the timeless reality.

We have been so focused on using the mind that the conscious present moment has never really existed for us.

Why did it never exist for us?

The fundamental reason is that I was so focused on using my mind, that I thought I was my mind, and Eckhart Tolle puts it here perfectly.

Because it is the nature of the mind to think only in terms of past and of future the conscious presence doesn’t exist to the mind.

You can comprehend the past and the future with mind because the mind thinks in terms of images.

The mind itself creates images, which is why past and future can be grasped. These images are of memory or anticipation.

The awareness of the present moment, however, is not an image and that’s why the mind cannot grasp it.

The present moment does not take any form and that is why it cannot be comprehended with the mind, because mind can only grasp forms.

Wait a minute, where is the present moment in time?

Time is a measurement that we use in this world. Clocks have 24 hours and we use them to make our way throughout the day, plan things, set appointments, when to go to bed, to wake up…etc.

This moment is eternal simply because you could never directly experience the past or the future; you can only imagine them, using the mind.

Well, if the moment is eternal, can you actually think about eternity and what eternity actually is?

The obvious answer is “no,” and if you cannot actually picture a clear image of the future going on forever, you cannot grasp or comprehend what eternity actually is.

And if the present moment IS eternal and neither of them have an actual image, then you cannot grasp or comprehend either.

The truth is, though, that the present moment and eternity are not two different aspects, they are the same exact timeless reality.

Time is a measurement of that which you can grasp, and that is why the present moment is not OF time.

We circle back around to why the human race is insane. (Which is not a bad thing, but humanity is looking to go to the next level)

The human race is insane because we never actually go beyond what our mind can grasp; we never TRULY get a glimpse into the conscious present moment except for very brief, but almost insignificant, moments.

There are occasions (whatever the life situation brings in your life) that zap you into the timeless present moment.

I was talking to a buddy of mine at the gym. I had known this guy for a few weeks and I could tell that he didn’t truly know what it means to be consciously aware of presence.

So, I decided to wake him up in the moment by asking him to visualize something that happened to him.

When someone believes that who they are is the mind, the only way to work them out of it is through the mind.

At that point, mind is the only thing they have to work with until a further expansion of consciousness within is revealed to them.

So I asked him to go back to a time in which maybe he got into a car crash. And it just so happened that he had almost been in one 2 weeks prior to our conversation.

I asked him if it terrified him. And he said that it absolutely had.  Then I asked him if it seemed like time had slowed down and his perception had sharpened in that moment of almost getting into a crash.

And he said, “Yes” In fact for that moment, it seemed like time had stopped and yes, indeed, his perception did sharpen to point that he was completely aware of the present moment.

I told him something along the lines, but not verbatim, of “BAM, right there when time had stopped and your perception had sharpened, you’re almost getting into a crash zapped you out of time, out of the mind directly into the feeling aware presence.

So when time had stopped for him, just as the crash almost happened, did the clock stop ticking?

Of course it did not, the clock continued to click just as it always does, so what was he experiencing in that moment?

The irony here is that, we haven’t talked much since then, not that I haven’t wanted to talk with him, it’s the other way around—simply because the phantom self or false identity had been threatened. Because when you go into conscious presence everything your mind understands intellectually vanishes.

“The light is too painful for someone who wants to remain in the darkness.” – Eckhart Tolle

In this conscious presence, the self-image vanishes, the image that you had held onto for so long.

Remember all labels, objects and or things you can grasp such as time are annihilated and dissolved by the feeling aware presence.

So when you get to the root of why the human mind is insane it is because the collective mind or universal mind has created 7 ½ billion individual FALSE identities, which creates separation and, thus, is the root of suffering.

The irony of you is that you are not a who or a what, because both are objects, things you can grasp, which why you then have to dis-identify with all words as well and simply use them as tools and only tools to communicate with other humans such as this article has been used.

Once you dis-identify with the mind, you can truly be aware of this conscious present moment as it is: life, existence, freedom from time and, thus, freedom from insanity.