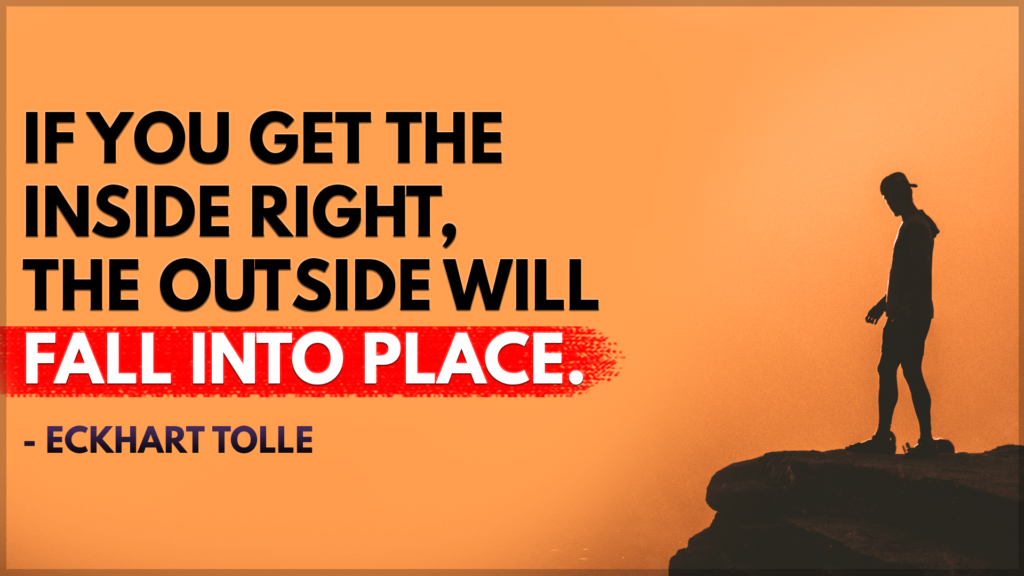 Have you ever wondered why it seems like governments, banks, corporations, and the like are on the hunt for power, greed, money, and control?

Maybe you haven’t wondered and are clear as to why, and yet you contemplated anyways.

I have spoken with many people, more than I can count, who call out the “government” and people in power for being control freaks and megalomaniacs or maniacs for power.

But then I took a good hard look in the mirror, really a look at my own personal mind, to question my own self if I was in a position of power knowing I could get away with a whole lot more…

And then it became clearer and clearer that it’s already happening on a day-to-day basis, just on a much lower scale & different circumstances.

Got to have more money…

Got to have faster internet speed…

Got to have more fame…

Got to have more materials…

And it made it quite obvious that it’s easy for us to always put the blame on others or have an enemy like “The government”, when, if we are operating at the same conscious awareness as most of the world, we would be doing the EXACT same thing if we were in a position of power.

Not everyone, maybe not even you.

But part of watching the mind is not worrying about the fact that perhaps you may have been lying to yourself, to stand in a position of feeling superior to ‘the enemy’, or according to you those with inferior motives, inferior morals, and inferior ethics.

And yet, those things are relatively true where expanding conscious awareness is absolute, in the sense that it does not require time, opinion, or the mind’s projected subjectivity.

Since expanding conscious awareness has nothing to do with the personality, the self-image, and everything to do with what inherently connects every source of life known to man.

This is not about inferior or superior conscious awareness.

It is simply about feeling more deeply and intensely into what is the source that connects us all beyond subject and object.

This source has been called the eternal, the infinite, God, and omnipresence. But it’s not at all about the word: it is about what it’s pointing to.

The challenge that we as a race are facing is that we are plagued with stress, anxiety, depression, mental health, fear, and a WHOLE lot of emotional pain.

And these hurt feelings project out of us, creating and establishing wars that have killed and harmed billions of people who have lived.

“In his hunger for infinitude, material resources—forests, vast areas of soil, mineral deposits, animal and human bodies—are exploited and wasted with about as much reverence for matter as might be expected from a swarm of locusts.” — Alan Watts

One of the things that we are hoping to overcome with this pain is MORE….

The one common thread?

Because, on a conscious awareness level, we have yet to wake up to what is infinite, what is eternal, our natural self and also known as The Supreme Identity.

We are trying to force the finite (human experience) to be infinite.

We are in a constant search, constantly looking for the next thing to satisfy our needs, which, according to the ego, never seems to be enough.

Our education systems are predicated on being smarter (more), on feeling special (more), on getting the best grades possible (more) on graduating, and becoming the best you can be (more).

And there is nothing wrong with this, but as long as you have identified with your thoughts, and thus identified with the finite, this feeling of needing to be more becomes like a drug that feels like it can never be satisfied, creating an unhealthy attachment leading into stress and anxiety.

“Ego-identification with things creates attachment to things, which in turn creates our consumer society and economic structures where the only measure of progress is always more. The unchecked striving for more, for endless growth, is a dysfunction and a disease. It is the same dysfunction the cancerous cell manifests, whose only goal is to multiply itself, unaware that it is bringing about its own destruction by destroying the organism of which it is a part. Some economists are so attached to the notion of growth that they can’t let go of that word, so they refer to recession as a time of “negative growth.”― Eckhart Tolle

To the mind, it is impossible to find something that is infinite because it can only think in terms of limitation.

Why put limits on the mind, you say?

As you begin to wake up to the real ‘i’, the supreme identity, to your silent natural state, you will, in a lot of cases, still want more.

But there won’t be this kind of maniacal obsession to get “more” in the hope that eventually you will be completely and totally fulfilled.

Let’s take a look at a longer passage from his Alan Watts book The Supreme Identity.

Let’s break down a few of these statements…

As an entrepreneur myself, I can say you must want more if you’re going to go anywhere in business or as an entrepreneur. And yet, this can easily become a trap if your goals, dreams, and ambitions are means to an end, or are a means to be infinitely complete, right now….already.

2. “The psychology of ‘bigger and better’

…of the record smasher, the moneymaker, the speed maniac, the time-saver, and the religious fanatic is the psychology of the drug addict. To continue to give stimulation, the dosage of a drug must be increased.”

In our society today, we tend to equate making more money to be in direct alignment with productivity, and thus, that productivity is assumed to be what you truly want.

And yet, when you take a look at the mind of a drug addict, where the only way to overcome the pain of realizing that all my material achievements are in fact limited to the finite, I must then; barely exist now, before my focus is on the achievement of more.

…FROM thinking that the more I achieve my goals, the more I will feel fulfilled everlastingly.

3. “To continue to give pleasure, a symphony does not have to be played louder and faster at each performance.”

A symphony can be unbelievably harmonious, even in the soft and slow rhythms. Just as you are already complete here and now, as the supreme identity, without not just more achievement but even prior to the next passing second.

4. “He has not the faintest idea of when or where to stop. He knows only that he wants more and more and more of the same—more speed, more cash, more power, more territory, more converts, more thrills.”

If you have yet to wake up to your natural, total, completely perfect self right now, then you will have very little understanding that you are EVEN on this MAD SEARCH.

Someone who is on a mad search for more, for the next thing, is just under the assumption that it’s normal.

That it’s normal to want more, to be more, to feel more pleasure, and, to a degree, it is normal. And yet, normal includes with it a lot of pain, stress, anxiety, and tension.

As you begin to see who you are, which is already here and complete, you will begin to realize you were on this mad search that never led anywhere to everlasting freedom.

5. “He wants to possess infinity, whereas the man of sensibility asks only that he be possessed by infinity.”

Meaning he wants what is finite, as the experience of success, to be everlasting (Infinity), whereas, when you get a direct glimpse of true infinite completion right now, you will want to be totally engulfed by the grace that’s already here.

6. “Free from anxiety and impatience he can concentrate on the creation of quality rather than quantity.”

Because the human mind cannot comprehend the infinite, let alone the fact that it’s closer to you than your breath, the search that it’s on for infinity in experience, it ends up in this rush to get to the next thing for the hope of more pleasure, more certainty & more freedom.

7. “Free from the craving to possess spirit and life, he can devote himself to the perfect form and matter.”

Another side note that Alan Watts explains is that man cannot accept that things, thoughts, experience, and worldly pleasures are finite, and thus, ultimately unfulfilling to the ego.

The ego does not accept it.

One of the reasons could be that the ego is afraid of death, of eternal death, thus, it must experience eternity the only way it knows how, by consumption.

The ego is going to try to make worldly experience and pleasure infinite by rushing towards more. As the ego dissolves and you realize that you ARE the infinite and eternal, you will be able to experience the finite, worldly pleasures to a deeper degree.

Now, worldly pleasures are seen for what they are finite, and that is a part of the great harmony.

8. “He can love people with their benefit in mind rather than his own salvation.”

When the ego is only worried about consumption, gaining more in its pursuit of happiness, then people become objects/things as a part of its journey towards more.

The ego can, depending on how strong it is, give people no attention because they may get in the way of its ultimate satisfaction that lies in the future somewhere.

Once you know yourself as the infinite, you know them as that same infinite, and thus, by giving your full, complete undivided attention, you share this sense of infinite completion with them.

9. “Yearning for the infinite…

..he wrecks the finite limitations that seem to bar its attainment, first spirituality then physically. But when he realizes that he is, after all, one with the infinite from the beginning, he is in a position to be a creative instrument and to fulfill the positive aspect of his destiny.”

Every human being, whether they know it or not, is yearning to know this total completion, this total fulfillment as a result of knowing myself/yourself as the Supreme Identity, the ultimate knower.

True Wealth = Knowing yourself as the Infinite beyond all thought, thus this infinite completion.

Radiant Joy of Being = Being here, right now is itself the Infinite, the eternal.

Deep, Unshakable peace is known WITHOUT QUESTION when you know yourself as the infinite beyond all thought which cannot be obtained through the acquisition of worldly (mind) materials and experience.

A beggar is someone who, because they have not found this presence, our infinite nature is that the search for more is in a similar way to beg.

“Infinitely greater than anything the world can offer.”

Worldly achievements are also a part of the perfectly imperfect harmony and will not cause you pain, so long as you do not look at them for more than what they are, a beautiful finite part of the grand harmony.

And now, you can see why perhaps “The government” is also people, who are, in a lot of ways, like you who want to know who they are, but the only way they know how is to seek themselves in the world, and thus, in the finite.