What Ethnicity Do You Identify As? 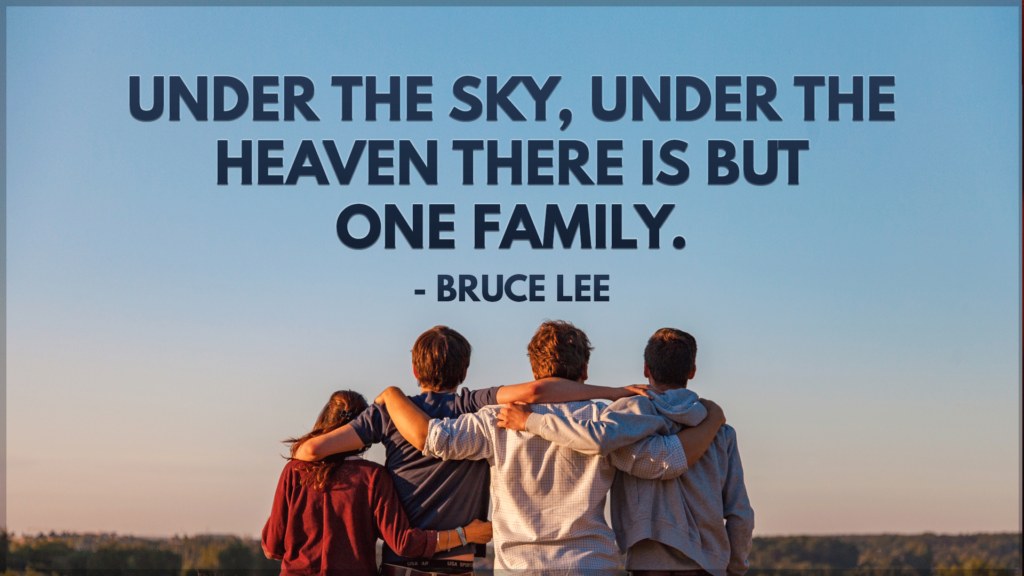 This interview played right into the wisdom of Bruce Lee. When the interviewer asked him….

“You know what I want to think of myself? As a human being.”

Regardless of who created that question for Bruce Lee, that question resembled a great portion of the current state of awareness that this human race is currently in.

The human race is being run by the human mind that loves to label everything it sees in sight.

The human mind and its complexity loves to label, separate, isolate, divide, distinguish, compare, contrast and everything in between.

According to the mind, we are no longer human beings anymore. Let’s take a look at some of the labels society has boxed itself in with.

According to most psychological books, we naturally gravitate towards people that we feel are like who we are.

So what does this mean then?

That every time we label a human being with these words and believe in these labels, the further we feel connected as the same species or race with other human beings.

Being that I’m from the United States, born and raised, I have felt sometimes like China feels like an entirely different species because of the disconnect I’ve been conditioned with throughout the years.

These labels are everywhere you turn, because of how buried humans are in their minds, the very things that learns these labels and accepts them, because it perceives in terms of separation.

Because at the end of the day all these forms of media and systems are run and created by our very own human beings.

“You know what I want to think of myself? As a human being.”

He was shining some light on a dark human race to show that the labels we have created are not the problem, it is that we have believed them to be absolutely true.

“Under the sky, under the heaven there is but ONE family.”

Regardless of what color your skin is, where you’re from, what culture you grew up in, you are a human being.

This also goes for that person walking down the street who, though, is a different race, a different culture and a different ethnicity then you, is the same exact species.

Now, if you take a look back in the 1800s and all throughout the 1900s, racial discrimination is far from where it used to be; however this doesn’t mean our generation can keep making the significant impacts on the direction in which the world is coming together and that doesn’t go just for skin color, ethnicity and heritage.

Racial discrimination has also been magnified in political views. Unless you have been living under a rock, you would have heard people calling each other names like…

You don’t really have pay that close attention to realize how much hate and separation is going on just within the United States alone.

Well firstly, according to the mind, this means having the same mind, but that’s not the purpose. Seeing eye to eye doesn’t mean how you interpret this physical reality, with your opinions, perspectives and outlooks.

The very nature of those mind made things are that that no two interpretations will ever be the same.

There will be similar view points, similar opinions, similar perspectives, but perception in and of itself, is unique to an individual brain as the mind sees it.

Seeing eye to eye, means the eye merges, the one infinite creator, the all seeing eye from being the separate mind that perceives separation.

Religion is the first human race divider, not because of the religions by themselves but from the human mind that divides.

“Those of who do not believe as the collective religious views of our country is an enemy.”

This seems to be what the voices of conditioning say in a very subtle yet an overpowering earthquake that rumbles through the planet from all different religions, no-one in particular.

Yet, as Bruce Lee summed his interview up with…

“It just so happens, man that people are different.”

He didn’t say that the essence of people is different; he was referring to the way that people interpret the way that reality looks.

However, if you want to go deeper, even calling yourself a human being is limiting and labeling you to your truest essence.

You are not just a human, you are a human being.

Being is what is.

Present particle of Be. And synonyms include:

existence, living, life, reality and actuality. This means, essentially, what it is saying is that the human part is a dream we have been living in ,and the only way to awaken out of this dream and into oneness is through our being.

Underneath being a human, you are Beingness itself, existence itself, life itself and there can only be ONE existence, one life and reality which are the same one no-thing.

The reason that existence no-thing is because it is only the mind that sees things, thus the separation.

(There cannot be a SINGLE thing for there is one existence, one reality hence the name single.)

In fact, if you look at the word existence, you will see the word exist in there. It means that humans are so wrapped up into labeling things, comparing, contrasting that they have yet to simply exist, and let simply existing be enough, to be complete.

And it comes back to the being completely stuck in the human mind. The human mind is actually the perfect combination, because being a human and being a mind are the same thing, the EXACT same thing, for that matter.

From beyond the mind there is not even the concept of a reality, because reality itself does not exist.

The moment a single thing is interpreted by the mind is the very moment of separation.

Humans would mostly agree that they would like to see the world come together, but not until they have found that Beingness, that uninterpretable existence from within, can they can actually mean it and it can actually happen.

Bruce Lee was right when he said we are one family, but he also knew that we were one essence.