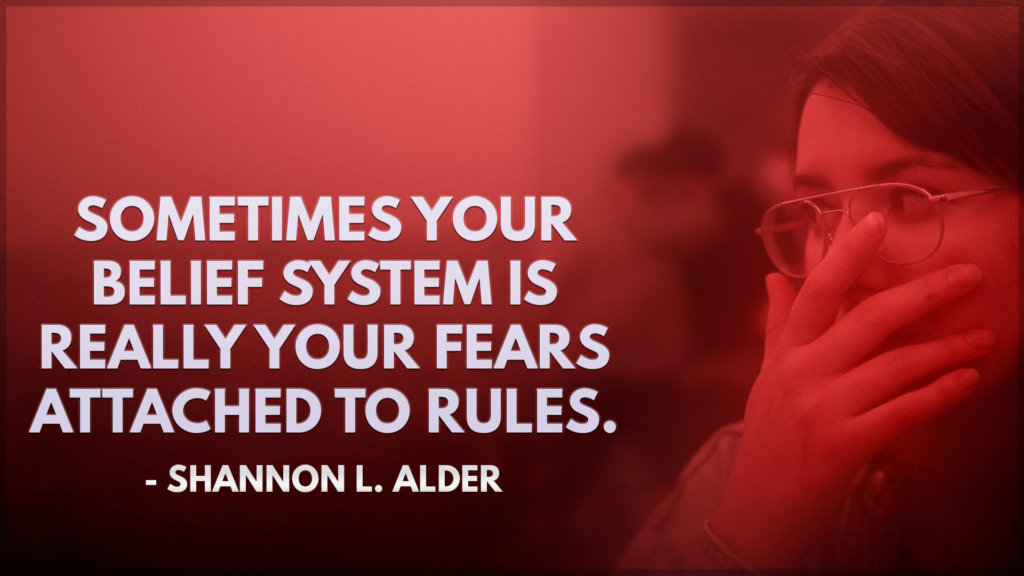 Have you ever taken a good hard look at your belief system pertaining to the world?

A belief system is a set of thoughts that you have over and over again and that you believe to be the absolute truth.

An individual belief system is actually a world belief system, if you go to the root of beliefs. It’s not that you have the average belief system of the entire world but it is still largely affected by the world around you.

Your belief system is the average of the culture in which you grew up: if religious, then your religious views, the media that you consume, which includes social media, the TV and radio stations that are the focus of your attention.

We are all conditioned in some way, shape or form; it is impossible to live in the world and not to be somewhat affected by the world around you. We have massive amounts of information trickling through all of our five senses for the greater portion of the time that we are awake.

Everything that passes through our sense perceptions is making an impact on the brain and within the body in some way, shape or form.

Most of the time people think that unconscious means to be completely comatose or to be in a deep state of being absolutely unable to think.

That is a definition from the surface value, but unconscious spiritually speaking means to be unaware that you think.

Thinking happens to all of us, the basic function of the mind is to think. Thinking is how we survive in this world, and yet, without realizing that there is something beyond thought, your mind may survive; your mind will be alive but your being, your truest nature, will feel very unalive.

This unconsciousness on a mass human race scale is the SINGLE largest reason and the root for the suffering that happens within the world.

It’s the largest reason for the suffering on an individual scale and amongst the collective human race.

Unconscious is simply the lack of awareness OF awareness. Therefore, to be conscious means you (awareness) are aware of itself.

When you become aware of awareness, this allows you to realize that there is something outside of thought.

So if that something outside of thought is you, then who you truly are does not think.

The you that is awareness has been given body/mind through which to experience itself, but the one you is changeless.

There is a mind writing this and a mind reading this, but the same “I” exists from behind both minds.

Being that you occupy your mind for a little while, it is best to understand how it works to keep from allowing it to make itself suffer.

Why does thought do this to us?

Thought is not in any way, shape or form a dangerous thing to realizing our peak joy, bliss and peace in life.

It is the lack of awareness that existence, fulfillment and freedom lie outside of our thinking.

If who you are is not your thinking, then who is thinking?

The collective mind is thinking. You are sharing the same thoughts just in different ways, with the rest of the world, most significantly your cultures, but even the cultural mind is part of the overall collective.

The collective mind is a phenomena seeming to exist for a little while so that the universe can experience itself through form.

There is a part of the phenomenon called ‘thinking” that does create an illusion that we believe is absolute truth.

Because the conditioning itself has conditioned us to believe so. They have force fed our minds to believe thinking is the absolute truth, so that we follow the system and keep things the same.

One single thought inside yourself is not yours, it’s based from the outside world.

If every mind was a clone of one another, then the universe would already be complete in that there would be no reason to live on in the world of form anymore.

With that being said that is why we still need to use the mind as a tool, because that is how our minds/bodies survive, and what an opportunity of an eternity we have, to get to experience this world and everything with it.

The point is, if you ever want to find absolute truth which is the direct reflection of absolute peace, serenity, and tranquility then you must begin to first be aware of your thoughts and to question whether they are based on absolute truth or not.

Consider the dogmatic approach that some religions take part in. If people believe that who they really are is based on religion, then what are the chances that he or she would feel offended by someone else’s religion or religious beliefs and perhaps want to kill or threaten that person?

The word religion in its very nature means to bring together. Yet it’s the cultures that use their religion because they are identified with it as an excuse to create war and separation from within the earth.

When the individual’s start realizing that who they are is NOT their culture then they won’t take the religious doctrines as seriously creating more peace from within themselves and within the rest of the planet.

I don’t want you to take my word for it, however, I want you to ask yourself this question and be very honest with yourself.

“Do I believe that the world is generally a peaceful place?”

For me, I feel the world is in a perfect place because the world is as it is spiritually speaking; however, we can move forward deeper into ourselves, by being aware of the silence that we are.

The world has conditioned itself, and until it starts crumbling away the walls of conditioning, we will continue to be blocked from our true nature, which is internal peace on a collective scale.

Going forward, use your mind, don’t let it use you.

“The mind is a beautiful servant, but it is a dangerous master.” – Osho

The mind is a great tool that we can use to get around the earth, but we must begin to live our lifestyles, no matter how scary, from a place of emptiness awareness, to question the way things are and to rebel against society for the sake of finding our truth.