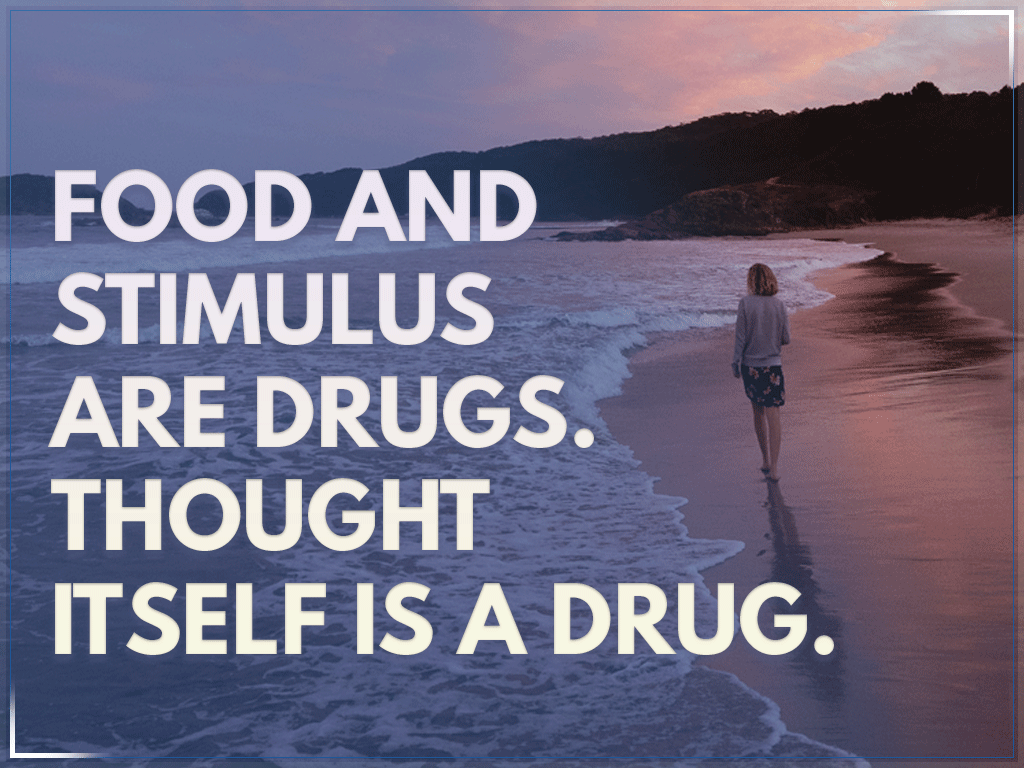 It’s kind of interesting in today’s society how we look down on drugs, whereas alcohol and over abusing food like salt/sugar are perfectly accepted.

Breaking: Alcohol is a drug.  Food and stimulus are drugs.

They just are different classifications for drugs.

Later on, we will take a look at the currently most addicting drug in the world.

But first let’s consider why we don’t take things like alcohol, food, and and stimulus to be drugs.

What general society is taught about drugs is that a drug is a medicine or a substance. For example, pot, acid, ecstasy and cocaine are some examples of what people consider to be drugs.

What I consider to be a drug, however, is anything that can lead to an addiction, anything that you need to feel better or released in the present moment.

See this… A drug is certainly one of the major things that people can become addicted to or obsessively dependent on.

Even if you look at the example provided by Google, they use ‘drug’ as the example for an addiction.

What is not discussed in a similar manner like that of a drug is the food we eat, the alcohol intake and things like technological stimulus.

There is a huge dependency on food in humans that we eat more than we absolutely have to eat to survive, the alcohol intake, and the technological stimulus.

According to Small business.com

United States alone sales $90 billion dollars’ worth of alcohol per year.
According to Franchisehelp.com

And you don’t have to go far out in public to see people looking down rapturously at their phones. Everything from Netflix, to YouTube, to Social Media, video games, to texting and everything in between has made it extremely appetizing to be entrenched in technology most of the day.

This picture perfectly illustrates the technological stimulus addiction of which I speak. 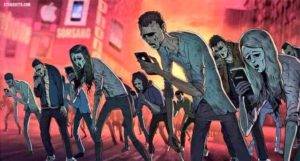 Credit: Steve Cutts
And by no means am I insinuating that any of these are bad, and not even claiming that addiction is bad.

“Nothing is good or bad but thinking makes it so.” – Shakespeare

What I will claim, though, is that addiction to things like overeating, alcohol intake, technological stimulus intake, drug abuse and any other addiction is because of a pain we have inside that we are trying to cover up with things outside of us.

That addiction is also deepening that pain when we aren’t buried in them and also while we are buried in them, because they are satisfying our false needs during that time.

Why do addictions occur? There are certainly layers to it, but there are a few considerations.

No newborn baby is born addicted to anything. Babies may be more prone to addictions based on its bloodline, but it is not absolutely certain will that baby grow up to be addicted.

It’s obvious that humans rely on basic survival things like food, water and shelter, but the craving for more than is necessary is always learned from the outside world.

Craving and desire for more is always learned.

#2. The subtler, not so in your face, addiction. Obsessive thought.

It would be easier for the world to accept that there are things outside of them aside from drugs, that they we can become addicted too.

After all, there are classes like alcohol abuse, sexual abuse, and food addiction that make these  pretty clear in today’s society.

There have been many hundreds of thousands of people to go through particular addictions, making it easier for the next human being to inject the current world conscious into itself.

Dis-identification with thought or the thinking-mind.

These go hand and hand, although, you can’t work your way through thought obsession without realizing that you are not the mind.

The eyes cannot see themselves.

The ears cannot hear themselves.

The nose cannot smell itself.

“The problems of the mind cannot be understood on the level of the mind.” – Eckhart Tolle

The mind can go on forever and ever trying to understand itself, and it will be an infinite asylum. The mind is the conditioning itself.

It is the storage for information turned into memory. The mind itself is what becomes addicted, to what craves things like overeating, overdosing and any addiction in particular.

Until you know who you are, you will be addicted to thought and not even realize it.

The basis of an illusion is something that you think is true or real, but it isn’t in the absolute sense.

It appears to be real to your mind, but beyond your mind it is not. The obsession with thought is where the beginning of all other obsessions begins.

Dis-identification does not mean that just because I am not my mind means that I am a someone or something else.

It means that I am no-thing and no-body, and in the realization of that feeling, aware presence is your perfection itself.

Perfection not in the beliefs or contemplations, but in the mysteriousness, in the unknown mind itself.

Dis-identification does not happen by you trying to do it, or by you believing it, it happens in the most natural sense.

In other words, you cannot make it happen. Most of the world are trying to let go of their addictions by trying to MAKE them happen.

This has worked in one sense, in that whatever was trying to be covered up by that addiction was forced away, the cover up will always streamline into something else.

It’s a good reason for why when people stop smoking cigarette’s , they end up indulging on food relentlessly.

The addiction was stopped, but the root was not cured; thus, it went from alcohol to food.

Just by dis-identifying from the mind and the ability to see through thoughts does not mean that you automatically will not be addicted anymore.

That can happen, but sometimes the conditioning is still super strong in someone to the point that it may take a longer period of time and a more intense knowing of who one is.

That means that it may take much longer periods of time for the thoughts and addictions to stop naturally.

And that is how it must happen for the addictions not to stream into something else like an electrical current from one piece of mental into another.

Addictions must stop naturally as a result of dis-identifying from the mind, from the conditioning so that the thoughts of “CRAVING” can dissolve.

Then we move into ADHD or attention deficit disorder.

A lot of people would conclude that ADD just happens and is not influenced by the conditioning. Just as no newborn is born addicted, they are not born with ADD.

It is learned from the outside, specifically as a result that a good number of humans think that they are their minds and, as a result, do not know what the true thoughtless presence is.

But let’s stop the breaks for a moment.

This could be one of the biggest mistakes in terms of one being aware of the present moment, or the alive feeling of presence from within the body one could mistake present moment awareness to mean concentration or focusing.

I was diagnosed at around the age of 6 with ADD, and nobody ever seemed to make it specific what I was not able to focus on?

What does it mean, the ability to not be able focus?

Focus on what: one specific thing at time?

You can only focus on one specific thing at time.

Focus on one specific thing at a time for a duration of time?

And focus on what part of it?

When you are thinking and your thoughts are wondering off, you are still focused.

When you imagining, your focus is on what you’re imagining.

When you’re thinking about the past, your focus is on the past.

Say someone is trying to teach you something but your mind is planning for what you’re going to do later.

Your focus is on the planning. Does that mean you have an attention deficit?

No, because the focus is still there.

And besides, thoughts just happen on their own accord anyway. If they didn’t, why would anyone ever choose a negative thought period?

I’ll tell you what I feel is the REAL ADD.

It’s from not being aware of the thoughtless present moment as you.

It means that we are trying to focus the mind TOO MUCH.

It means that we are trying to concentrate the mind TOO MUCH.

The mind, in its nature, wants to focus, but it wants to wander it’s focus naturally, effortlessly, spontaneously.

More importantly, the body wants to take a break from the mind. The body stops wanting to be controlled only by the mind and more by the infinite intelligence within it.

There is only one way to be in thoughtlessness, in timeless presence, and that’s for the mind to stop focusing, stop concentrating so hard, especially because of your feeling aware presence cannot be focused or concentrated on.

Who would it be focused on by if the mind isn’t here?

There is no-thing or nobody to focus on what is here prior to all thought.

The lack of focus happens because of trying too hard to focus so much.

Impulse control and hyperactivity happen because of NOTHING but mind concentration.

What will end up happening is, that by allowing “you” to see through thought, to take a break from the thinking-mind that focus/attention will happen more effortlessly.

Mind focus and attention are needed for survival, for your job, career, financial success, memory, anticipation, planning, goal setting, communicating, listening and everything in between.

These will come a lot easier and for longer period of time because you weren’t trying to so hard to do them anymore.

Presence is now directing your mind, rather than mind trying to direct it.