A Human Race Dragged Down By History 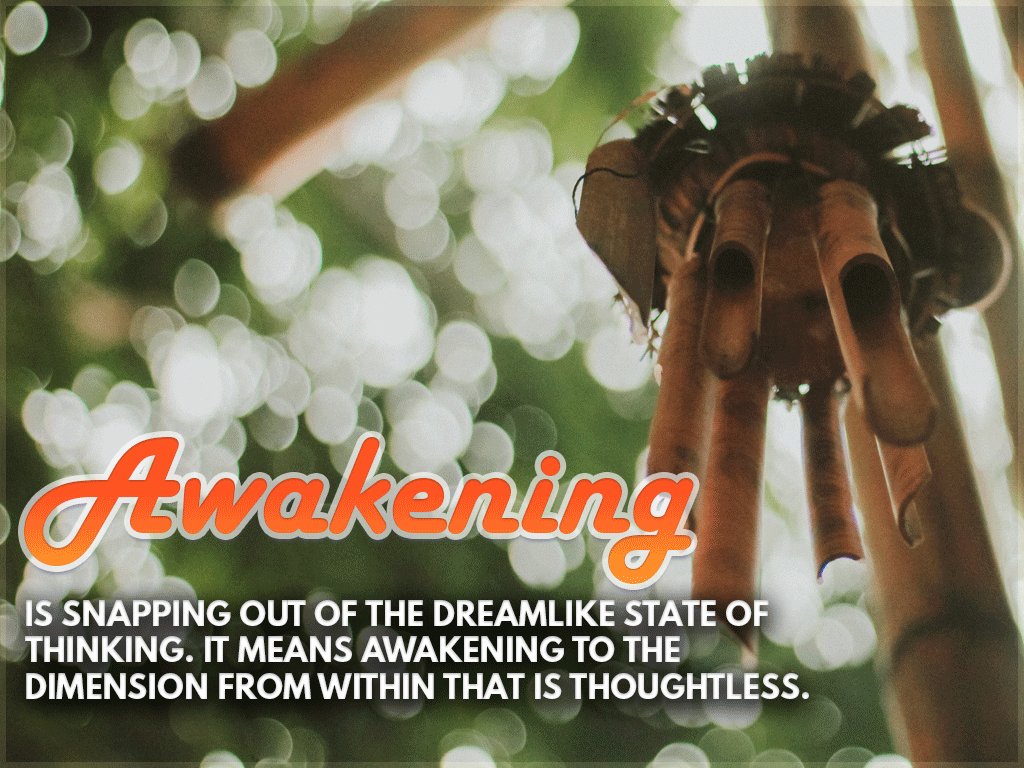 “There are many spiritual experiences, but only one spiritual awakening.” – Sailor Bob

Since 2015, since I read the book The Power of Now and had been introduced to spirituality, it’s been crystal clear to me that the present moment is the one and only true spiritual awakening.

And that is awakening to the present moment.

After many books and audios of reading about presence, silence and emptinesss, I put the pieces of the puzzle together piece by piece, dot to dot.

At the end of the day, when you boil down spirituality to its most basic form, it’s about looking inward.

So what was it about the present moment that is looking inward?

I had difficult time figuring out how the “Now” is about looking inward.

Not in as in looking in a direction though, or about finding some new beliefs or thought systems inside, but as awakening to the dimension that is inward.

What is the awakening anyway?

It’s because, until you have awakened, the only thing that occurs to you is the outward manifestation as the way your thoughts see this physical world.

In essence, what it really means to look outwards is to think, thinking is you see and make sense of the world. Being asleep to your thoughts means that you take what your thoughts see in this world to be reality and the only reality.

Awakening is snapping out of the dreamlike state of thinking. It means awakening to the dimension from within that is thoughtless.

The reason that looking within is not about direction is because without thought the direction does not matter.

That thoughtless state is the present moment.

As long as we have a mind, and we continue to have it in this world, awakening is not a constant process though.

You can be awakened one moment and be completely asleep the next, depending on how seriously you take your thoughts.

The more you awaken and realize the thoughtlessness that is always here, the more the gap widens and the more often you awaken.

The point of awakening is that, until it happens and thought is your only reality, then will ever you be free inside.

Experiencing this physically happens through the way that we think about what is happening and how we have been conditioned.

All thought and experience are superficial in that they are coming and going so fast that you can’t pinpoint and hold onto a concrete specific reality out of them.

It is only beyond thoughts and experience that lies a neutral reality, a reality that does not change.

And this is concrete because we can rely on it to be the same no matter what we are thinking about.

Anything that is not subject to change is stable, constant and planted firmly in place as fulfillment: the dimension from within that thought cannot think about, that the eyes cannot see, the tongue cannot taste, the fingers cannot touch and the ears cannot hear.

Fire cannot burn it, water cannot drown it and the wind cannot blow it away. But you know for absolute certainty that it is right here, because the only thing that you can be absolute 1000% certain of is where you are, which is right here.

Being that when I awaken out of the dream of thought I have felt an unshakeable, unbounded and limitless peace that is indescribable and not accessible by the way we view, see and think about the world.

As you begin to awaken, you become more compassionate for all things, more caring and more understanding, and when the truth overtakes you, it’s difficult not to want to share it with the world in as many ways as humanly possible.

However, I noticed that when I bring up present moment over the last few years, and I mean the true presence to people, they get tears in their eyes, and seem sort of uncomfortable.

They either change the subject, or claim they don’t understand it and don’t want to discuss it.

I knew how freeing it felt, so I questioned and wondered what it was about discussing presence to people that made them uncomfortable.

And then, just as awakening is not an ongoing process, it has to HIT YOU. This HIT me.

It just hits you all the sudden.

It just hit me.

For centuries upon centuries, we have been looking outward, stuck in thought and stuck in time that we have grown accustomed to it.

When you know nothing but thought, then the resistance to “what is” will come and come often.

Being that the world has been stuck in resistance for so long, what happens inwardly projects outwardly.

A history full of resistance as a result of being stuck in thought has created a ton of weight on the human mind.

This weight, this resistance, has created civil wars amongst the human race.

You can call it greed for fortune, power, technology, but it does not matter because it all comes back to the resistance that starts from within the human mind.

We live on a rock in the middle of a nowhere, with no rule book, with someone’s “thoughts” on how to live, and somehow humans think that there is something to be gained by killing one another. (Resistance)

“A tale told by an idiot, full of sound and fury, signifying nothing.” – Shakespeare

The reason that resistance comes in the form of thoughts is because all that you know is thoughts. And things in this seeming moment don’t seem to be going well inside, then you only have the choice to look to the past, which is when things “used” to be fine, or you look to and dwell on a future in which someday things will be “better”.

You can certainly take the necessary actions to make your situation better, but dwelling on the future in the hopes things will be better is resistance to “what is”.

Many people would say that hope for a better future has kept people alive, but almost certainly that person would not have needed hope in the first place if they were not in a never ending dream of resistance.

The human race has been drunk on resistance for centuries now That is what we have grown accustomed to, and anything that potentially threatens what we think we know is frightening.

All those traumatic experiences that have been built up in the mind as memory come up to the surface in silent, empty presence, where you cannot no longer resist.

However, what you resist persists and the trauma will haunt you like a shadow for good, if you do not allow everything to rise in your empty awareness of presence.

No matter what you’re thinking about in this present moment, if it is irritating you, then let the thoughts go and feel the irritation to its fullest.

So the point is, people are uncomfortable when I discuss presence because it makes them look inward into that thoughtless dimension where they can no longer resist what is.

It means they will have to feel down to the core of all of the weight coming up from the past that has been dragging them down.

And that is frightening to the….

The reason that we have not known the present moment for what it is, which is empty, neutral silence is because we have completely identified with thought.

We have taken ourselves to be the thinker.

Awakening is that the thoughtless happens; you don’t stop thinking because you never think. Thoughts happen, which means that thoughts also stop on their own, but they cannot stop until you stop believing yourself to be them.

A very large portion of the human resistance is as a result of false identification of who we think we are.

I’ve witnessed countless drunks in my life, people that I care about. I’ve watched them have to cold turkey alcohol in order to get off it, not a pretty picture.

They have to detox and cleanse themselves of all the toxins that were the result of the alcohol.  They go through withdrawals, sweat and sometimes throw up.

Anyone who’s gone through it will tell you it’s a horrible process.

Running from the present moment really means, in essence, that we are resisting resistance.

We have been drunks on resistance, on thought and on past/future.

The present moment sometimes provides small glimpses of thoughtlessness and sometimes deeper glimpses which really flush, detox and cleanse out a system that has long needed it.

Although the process isn’t nearly to the extent of a detox of alcohol, sometimes allowing a full blown, intense resistance to be felt to its core is extremely challenging.

With this being said, no matter how seemingly unbearable your feeling, your emotions cannot survive for long in the face of your feeling aware presence.

False identification and resistance has been haunting the human race now for far too long.

The history of a human race has us carrying around backpacks full of bricks AKA the weight of the human mind, in many of our experiences.

It’s like a fly that is agitating you no matter where you are going.

The present moment is not going to make all your seeming problems go away; it’s about letting you take a break from the very thing that creates problems…. the mind.

The mind, though, is not the problem; it is a beautiful instrument, but it becomes dangerous when it is all you know.

Being aware of presence, even for a tiny glimpse, is enough of a crack to let the light of consciousness in, lessen the weight caused by resistance.

Rather than making being in the present moment a challenge, just allow yourself to see in this moment. You don’t need to wait to see what is always here right in front of you. And it is only from here where resistance is let go of and where peace is.