The Absolute & Universal You 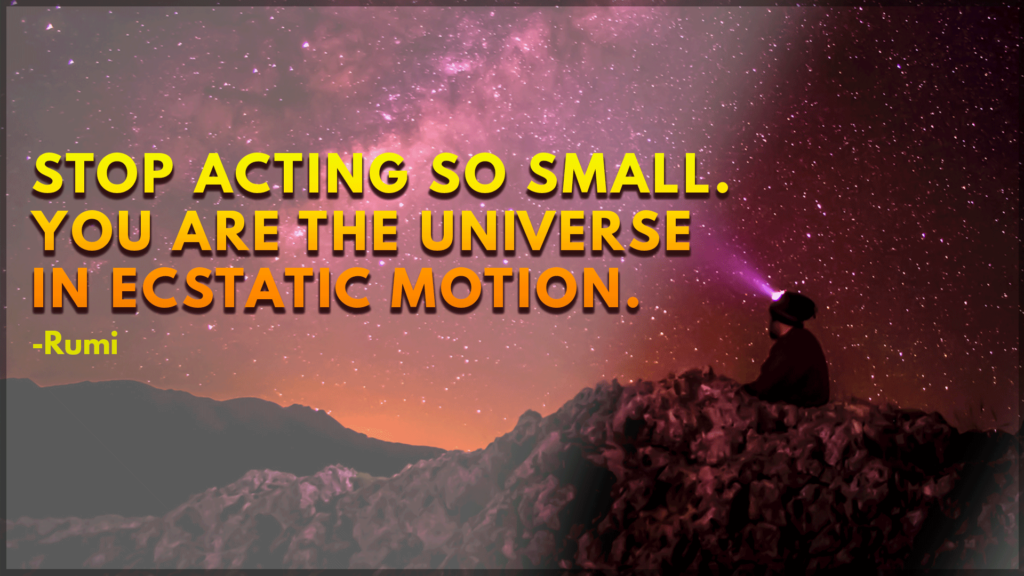 So today at the gym I told a good friend of mine that she was not her mind.

And for someone who isn’t into spirituality this is very large shock and normally what they do is try to believe it, and they won’t believe it, because knowing who you are requires no belief, so then the natural question I get back is…

So the conversation we had inspired me to write an article about it.

Being aware of who you are in the absolute sense is not something that can be grasped by the thought.

However, in a general conversation or to at least open up the spiritual flood gates to someone to who they are at the deepest level, one must start first with using the mind.

So I had actually been contemplating how exactly I was supposed to answer that, and the best, most practical way that I could come up with is this:

You are a source of energy called the universe and that source of formless energy is using your body, your mind and your emotions to experience this world of form that this place we call earth has taken.

Rumi and Eckhart Tolle express this when they say

“Stop acting so small. You are the universe in ecstatic motion.” – Rumi

“You are the universe experiencing itself for a little while.” – Eckhart Tolle

To be ecstatic means to experience a mystic self-transcendence.

In other words, the universe is experiencing itself through you in every motion that you take. And this experiencing goes far beyond this little thing we call “me” or “myself’.”

Everyone believes that when we come out of our mother’s womb we are born into the universe.

Well, sorry, but not sorry to burst your bubble, we are actually a part of it, long before we are physically born and long after the body/mind die physically…

Alan Watts puts it’s perfectly when he says, “We do not “come into” this world; we come out of it, as leaves from a tree.

As the ocean “waves,” the universe “peoples.” Every individual is an expression of the whole realm of nature, a unique action of the total universe.”

This is a perfect example of why perception is extremely limited, because the human mind cannot perceive the present moment as eternal with no past history and no future ahead.

You can also sit there and think and philosophize how the present moment is not a part of time, because how soon is now?

You can write thousands of books on the present moment, but until you are DIRECTLY aware of the present moment through your inner body awareness without a thought, without a second, then thinking and talking about it will do no good in terms of being aware of your truest true nature.

All that you perceive to be away from you is also right here.

The star that you cannot see or comprehend that is measured to be 9 trillion light-years away is also right here.

ATTENTION: Don’t try to believe this with the mind though, pay attention to the silence that it is right here, don’t try to think about the silence, allow this silent moment to be as it is.

OK…OK I get it, your mind wants more practicality. Here you go…

Take a good hard solid look at your life right now and consider everywhere, where you get irritated by things you perceive outside you.

Look at all of things in your life and really pay attention to the things you deem significant and then ask yourself, “Does the universe consider whether that’s significant or not?”

Alan Watts is up to his brilliancy again when he says…

“Man suffers only because he takes seriously what the gods made for fun.” ― Alan W. Watts

You know how the old saying goes, “why cry over spilt milk?”.

And yet, I’m well aware that milk very rarely ever spills (I drink a gallon every few days, so trust me) and so people never take a look back at all the REALLY insignificant stuff in their life that they go practically insane over. But it isn’t their fault though, it’s the collective pain conditioning that they have learned this from.

Have you ever seen or gone psychotic over someone who is driving too slow in front of you?

Why would something so insignificant drive people practically insane?

Now with this being said, I’m not saying I don’t have emotional pain and anxiety in this life in terms of the things that happen in this physical world.

However, because I’m aware of my mind when I see then, I let those crazy emotions be here inside without rejecting or not wanting them to be here.

So when you take a look at the physical world (which in some pessimist people would call the “real” world), this ‘real’ world is in such a constant constant state of change that by the time you perceive the real world it has already changed.

“Reality does not change.” – Sailor Bob

How do I know that the collective humanity doesn’t know the absolute truth?

It was once widely thought among the human population that the world was flat.

So why should I believe that the world’s collective belief system is based on absolute reality today?

The key is not only do you not need beliefs; you can’t have them in order to know who you are absolutely.

Going forward, the quickest way back into the real “you,” the universal self, also no-self, and universal totality is;

#1. Be Aware that you are thinking

Know that unless you take pauses throughout the day, your thoughts will run you. You will know yourself by letting the non-movement of mind happen in this instant.

When the mind is heavy or you are not feeling very good is the very best time to not take your mind very seriously. If you do, then the mind will strengthen itself and so will the pain.

#3. Know that you are not your mind

In order for you to be aware that you are thinking, there has to be something beyond the mind. If you were the mind, then there would nothing but thought and no ability to realize this.

#4. Know that the mind cannot see

The mind is conditioned and programmed to think, to believe, to grasp, understand and interpret. The mind is an amazing tool that we can use in this world for experience, but not for all knowing, all seeing and all witnessing.