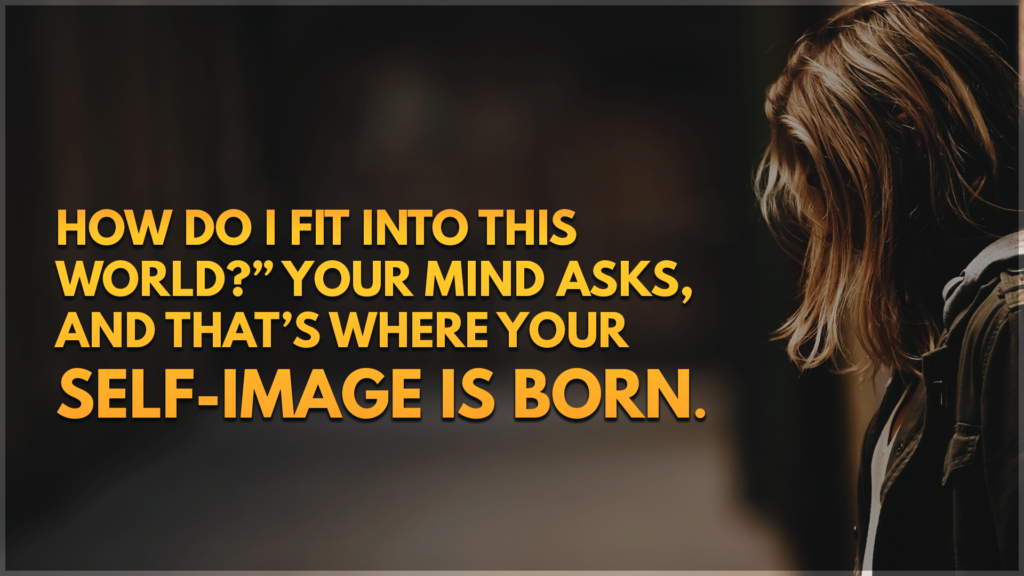 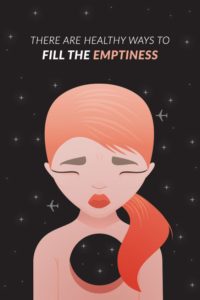 “There are healthy ways to fill the emptiness.”

Do you see the look on that girls face in the picture above?

This picture went massively viral on Pinterest and many people have mistaken what true emptiness really means.

All my life I grew up hoping that in no way, shape, or form would I have to feel emptiness inside of me.

Of course it was because of the conditioning and I’ve always heard negative context when it came to feeling empty inside.

I kept running from emptiness, along with most of the 7.5 billion individuals on this planet.

The problem was, that because I ran from this emptiness, I was never truly aware of the present moment.

And since, being aware of the present moment is the one absolute and constant internal freedom in existence, what I was running away from was precisely that.

Have you ever heard the term that the truth hurts?

The truth may hurt the ego, false identity or the mind made up images that we have taken to be true, but it doesn’t truly hurt, not your being that is. The truth is the only thing that will set you free.

What I mean by emptiness is that you cannot be aware of this moment by thinking about it.

The moment that you think about is only perceived through the eyes past, so really what you are seeing is the past.

The only way to be aware of that which you are, which is right now, is to let thought drop.

This includes emotions as well, not forever, just for this single moment. Emotions are the body’s reactions to your thoughts.

Both are passing, both are like clouds in the sky coming and going, but the sky itself does not go anywhere, and neither does emptiness, neither does the present moment.

The sky must become empty of all these clouds in order to be aware of the totality of the sky.

The present moment (you) must allow emptiness to come in order to be fully aware of who you are.

Your emotions are your body’s reactions to your thoughts.

A thought comes and the emotion energizes the thought, and anything that you latch onto that is coming and going will prevent you from being internally fulfilled.

You take the thought or the emotion to be based on absolute reality and it is causing you internal suffering.

Realizing who you are through emptiness is creating peace, joy, freedom and fulfillment.

So emptiness is, and it is without the comings and goings of both thoughts and emotions.

By becoming empty—free from thought, from emotion— the present moment has become aware of itself or arising conscious presence.

There are few words in the regular English language that people often use to describe how they are feeling.

A lot of people just as that picture above will say “I’m feeling empty” or “I feel a void inside” and even “I feel insecure inside.”

And according to the vibration of words, the energy felt behind the words of these three different sentences are felt as deep pain inside.

But they are very different and they mix up and cause humanity a lot of suffering.

The two words that are similarly correct in the way that we use them are void and insecurity, both of which mean to feel a deep sense of lack inside.

However, the word we have been misusing, largely because of the cultural language, is emptiness.

In fact, a synonym (a word that means the same thing according to the dictionary) for void is emptiness.

Let’s go a bit further into void and insecurity.

When you say “I” have a void within, I feel insecure within generally what you are referring to is the self-image, the idea you have about how you are is off.

And because you think that this image of who you are is the absolute you, then 100/100 you feel insecure or a void because it is an image (created, sculpted, and molded) shaped from the society around you.

The self-image is shaped from the conditioning, the information, the wiring of the brain, the rules, laws and, most significantly, “the way to be” in order to fit in with the rest of the world.

The sense of insecurity is that your self-image is this way, but society says it should be that way, which leaves a gap between, wanting us to want more, to be more, to feel more accepted by our surroundings.

The self-image would hold absolutely zero weight without the people in your life who you also see as images of who they are in your mind.

“How do I fit into this world?” your mind asks, and that’s where your self-image is born.

This self-image gets so fixated on how others see you, so obsessed with fitting in that the image goes from being a practical use to an obsession.

It turns into what most would say “if I can just mold my personality into society and fit like a square peg into a square hole, it’s a SURE FIRE WAY to be LOVED.”

With this being said, it’s not about the whole “not caring what other people think” nonsense.

You must care about what people think if you want to survive in this world and thrive for that matter.

It’s about gaining whether you gain or lose your sense of internal freedom, based on how others think.

And the realization of your internal freedom happens when you realize the REAL you, which is not based on an image of who you are, which is relative to other images.

The image you have of who you are in this physical world is relative to, or in comparison with, the other 7.5 billion people on this planet.

But what is not relative is the true essence of all that is, which is one.

Not the proverbial one, the cliché one, but the source that lies in everything as everything, which is nothingness itself.

Nothingness and emptiness are this moment; this moment is not about whatever location you are in.

The location you are in is relative to the next location; you are the space from which this i observing presence is looking.

It’s not about believing you are one, it’s about observing space, from the place of space, and space is all that is.

Don’t ask the thought, which can only see and perceive objects; feel the space between the thoughts.

The best question to ask from within, when you are feeling insecure and lack inside, is….

Emptiness is who you are, it is the freedom, and you will feel a sense of lack if you try to fill it with thought.

Trying to fill it with thought will end up leading to things such as overeating, alcohol abuse, having sex, and, generally speaking, other addictive behaviors.

It’s why they call them addictive personalities, because it’s TOO MUCH personality, too much doing in the hopes of security and not enough simply being, as in taking a deep conscious breath and letting this breath give you the freedom you’re looking outwardly for.

The mind itself is insecure, unstable and unbalanced.

Because the thoughts, that it creates, come and go. And anything that comes and goes and never stops coming and going is unstable.

The unstableness, the insecurity, is a part of being a human being; In fact, it’s what gives life it’s flavor.

The mind being insecure is not a bad thing; it does not create pain and suffering inside.
What does create pain inside is that believing the mind can fulfill you, that once the self-image is sculpted in the perfect way I’ll then be fulfilled.

What does create pain is believing that I need to hang on DEARLY to my past because the good times build up the self-image that I have cherished for so long.

What does create pain is believing that my fulfillment lies somewhere in the future because then my self-image will be getting carved to perfection and then I can finally deserve love.

This is a grand illusion believed in by so many that is causing you internal pain.

Emptiness is not insecurity or a void; It is the direct opposite of both.

Being aware of the emptiness is the one stable awareness from within; it does not change, it does not rely on anything to happen and it does not leave you; it (conscious presence) is you.