10 Prince EA Quotes On How Technology Has Separated Humanity 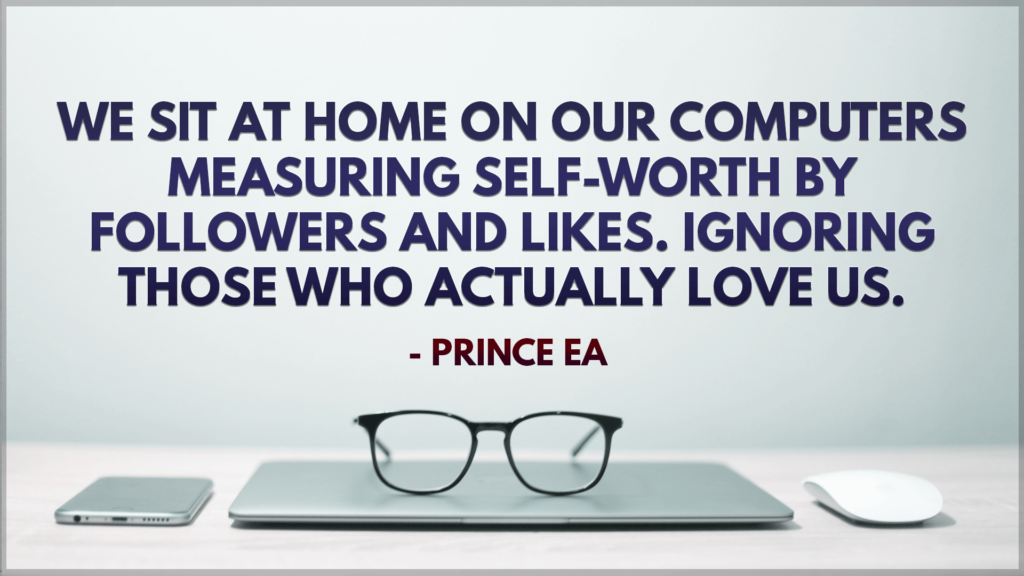 Prince EA, or rather Prince Earth, has caught humanity red handed with a brilliant look at how technology may continue to get better connections in terms of speed. Yet, it is increasing the speed at which human interaction is worsening in connection.

A must watch video showing how this connection has worsened.

“Did you know the average person spends four years of his life looking down at his cellphone? Kind of ironic ain’t it? How these touch screens can make us……lose touch?”

The irony is that most of the phones today are touch screens; and yet, we continue to lose touch with what matters most and that is the physical human to human interaction.

“It’s no wonder in a world filled with [I]Macs, [I]Pads and [I]Phones, so many I’s so many ‘selfies not enough us’s and we’s see, technology has made us more selfish and separate than ever, and while it claims to connect us, connection has gotten no better.”

The human race was meant to interact, to express ourselves with one another, and yet technology feeds our minds, which takes the place of human interaction. We think we are establishing a concrete interaction with humans on the opposite side of our devices, and yet we are unaware that it is a superficial interaction.

We spend too much “me” time and not enough “we” time.

“Mr. Zuckerberg, you should reclassify Facebook to what it really is an anti-social network. Because while we may have big friends’ list, so many of us are friend-less, all alone, because so many friendships are more broken than the very screens on our very phones.”

There are 2.2 billion monthly active Facebook users, with the average user spending a staggering 50 minutes per day on Facebook, source.

And I don’t know about you, but I’ll be the first one to admit that sometimes that 50+ minutes per day is not always spent the most productive, (cough, cough) newsfeed scrolling.

“We sit at home on our computers measuring self-worth by followers and likes. Ignoring those who actually love us.”

We are looking to be accepted by the world, hence the reason so many of us are looking for likes, shares and comments on our posts.

In today’s day and age everything is about social-proof and because of this we have begun to measure social-proof with self-worth.

The illusion is social proof will ultimately decrease or increase our self-esteem, when the only reality of self-esteem is how much you accept who you are in this moment.

“It seems we would actually write….an angry post than someone who may hug us am I buggin?”

Instead of venting to the ones we love who TRULY care about us we would rather the world know our problems by venting it to people we believe care about us by showing it in the form of likes and comments.

We are using social proof to cover up our insecure emotions.

“I asked a friend let’s meet face to face, he said “Alright what time do you want to Skype? I responded with OMG, SRS and bunch of SMH’s and I realized what about me? Do I now have the patience to have a conversation without abbreviation, this is the generation of media over stimulation.”

Instead of meeting in person with someone, it’s easier to jump on Skype and meet face to face without having to go anywhere.

Prince then responded with a bunch of socially accepted abbreviations and then realized he, too, was a part of the problem.

Showing that instead of in meeting face to face or having a real intellectual conversation, everything is being abbreviated, showing our generation’s laziness.

We are so over stimulated by technology, and we equate that stimulation to be making us happy.

“Chats have been reduced to snaps, the news is one hundred forty characters, videos are six seconds and high speed and you wonder why ADD is on the rise faster than 4G LTE.”

Snapchat, twitter, Instagram stories, you name it, it is all catering to our collective human attention deficit disorder, and people continue to question why it is continuing to grow, and that is because the media is marketing directly to it, making our attention spans even worse.

“Take control or be controlled, make a decision. Me? No longer do I want to spoil a precious moment by recording it with a phone, I’m just going to keep them. I’m not going to take a picture of my meals anymore I’m just going to eat them.”

Instead of using the internet and social media as a tool we have allowed it to use us. Instead of enjoying the experience of moments in our life, we have to share with the rest of the world what we are doing, ultimately going back to the desire to be accepted and seen.

And what happens when we need to share the moments is we lose the richness that each moment brings.

We are worried less about the moment itself and more about what people have to say about that moment, and this will always make the experience superficial.

So rather than needing your experiences to be seen all the time, soak them in for what they are, really cherish them in your presence.

“I’m so tired of performing in the pageantry of vanity. And conforming to the accepted form of digital insanity.”

Vanity according to Google means: Excessive pride in or admiration of one’s own appearance or achievements.

Essentially we are using the internet for physical appearances and to show off in a prideful way such as achievements that we have created, going back to…well you guessed it, acceptance.

“Call me crazy but I imagine where we smile when we have low batteries. Because that will mean we will be one step closer to humanity.”

Essentially Prince is wrapping it up saying that the human race truly wants to come together and be more connected than ever.

He is saying that once the batteries begin to die when we are out and about with our family/friends, that it will be perfectly OK, because we will have what’s most important still with us.

In conclusion, I am very well aware that you likely read this article and watched that video from a desktop or mobile device. It is also logical in that technology is growing at a rate faster than ever, and that humanity will continue to use technology.

Technology is not a bad thing if we use it, and not let it use us. Technology has created lesser realized things that we have had for a long time, like stoves, fridges, cars, many things that have helped us develop as a race.

Prince is simply saying to be aware of how much you are using technology, not looking at as a way to validate who you are as a person.

We all want to be accepted, loved and heard, so why not express ourselves like human beings in person?

Albert Einstein said this 70 years ago, and technology hadn’t even begun to scratch the surface of what it is now.

Just as in life when you make decisions how important mindfulness is, so is using technology mindfully.

This is not about going against technology but just becoming aware that we should take a good hard look at how much technology has taken control of us, and making small positive choices towards a more meaningful lifestyle, a less socially defined lifestyle.